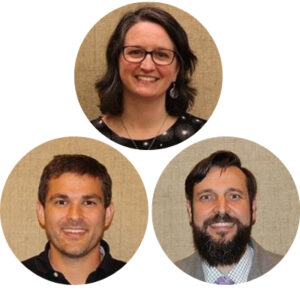 Housatonic Community College (HCC) chose the Associate of Science (AS) General Studies Degree for their Achieving the Dream’s OER Degree Initiative (OER-DI) because it is the degree awarded to the largest number of students each year. Also, HCC students who have undeclared majors are filtered into General Studies. The requirements of the degree includes a broad range of courses from each department, which gave faculty from all over the college an opportunity to participate.

Housatonic’s math department has had a well-established OER presence on campus since Fall 2014. Having joined the Community College Consortium for Open Educational Resources (CCCOER), they were working diligently to spread OER throughout their department. Upon receiving the (OER-DI) grant, HCC set out to introduce and push for OER in other departments, which is why they chose the General Studies AS degree. The initial selling point to faculty was to save the students money, but as they continue down this OER road, many faculty are now changing their pedagogical approaches in the classroom. The coursework is more collaborative and students are getting more freedom in their choice of topics. Faculty are meeting more often to discuss courses in detail and some faculty now want all their courses to use OER. Students having DAY 1 access to their instructional materials has only been one of the many successes from this grant.

Early on faculty had trouble with the course mapping requirement of the grant. They felt like the objectives were not very clear or that they were not as prepared as they needed to be to complete course maps. Having a history with OER did not necessarily prepare them for mapping within the grant constraints.

“Most of the obstacles I encountered with the course map of Intermediate Algebra were related to communication regarding the Creative Commons (CC-BY) licensing of course materials during certification. After many emails and confusion about how to license the course material, the course map was approved.”
—Michael La Barbera, Assistant Professor of Mathematics

Some faculty thought there would be more materials available to adapt, but in some cases, there was nothing, so they had to create, and they were not ready for that and the amount of time that it took.

“At the beginning of the project, I felt constrained by having to use only Creative Commons (CC-BY) licensed materials, particularly for reading selections in a class that is designed around these selections. I expected the course I created to be inferior to the version of the course I was currently teaching where I could use any readings I wanted. I realized that I could find CC-BY versions of many of the readings I wanted, and I found some new sources that provided good starting places for students to conduct their own research.”

“The biggest obstacle was finding adequate readings with CC licenses. I’m sure with more time, I could have found alternate readings. New readings require new research and course prep, so to do it right takes more time than I felt I had at the time.”
—Robert Wyckoff, Instructor of English

The last challenge was with the lab sciences. The expectation was that the lab manual would also be OER but it was just not possible to develop one given the time frame of the grant. Intro to Biology or Chemistry was not course mapped because the materials for labs are bought years in advance. Since they already had the materials for a lab, they could not bypass those assigned labs to create or adapt other labs that would hopefully use the same purchased materials. Ultimately, nutrition, which is not lab-based, and physics, which required more math and fewer materials for labs were mapped.

“I’ve been using OER for about four years now, and at the beginning, it was difficult to contextualize the materials, but now, it’s much smoother.”
—Michael La Barbera, Assistant Professor of Mathematics

The process started with an email from Housatonic’s first interim academic dean who attended Achieving the Dream’s DREAM 2016 Conference. He asked who was already implementing OER and who would like to try it out and learn more. From there, a steering committee was assembled: one faculty member from every department, one librarian, two grant writers/specialists, and one director of educational technology. Originally, the grant only paid faculty on the steering committee, but they quickly learned that was an error and that they also needed to give stipends to faculty who were mapping courses. Once that stipend was in place, faculty began to map their courses and submit them to Lumen Learning for certification.

#NoLo#NoLo means No Cost Low Cost textbooks.
Beginning with Winter/Spring registrations, courses that have textbook costs of $40 or less will be marked as #NoLo next to the course title. Registration begins November 1st.

Students in the OER-DI courses were made aware of OER by their instructors. Marketing to the wider community of students was held off due to an impending college shift to a #NoLo branding. #NoLo is the branding for the more generalized “No Cost/Low Cost” textbooks. Currently, #NoLo is marked on the course schedules and promoted by the college marketing team. The OER-DI team met with student advisors and explained the #NoLo branding which is also supported by the bookstore and library.

The expansion of OER on campus, due to the grant, has saved HCC students over $1,000,000 since Fall of 2014. Through the work of the OER-DI, HCC learned not to necessarily push OER degrees, specifically, but rather OER as a movement, and to help expand awareness and use within departments, either for entire courses or for parts of the course. Housatonic has also decided to include some low-cost publisher texts in its costs saving calculations, beginning January 2019. The new movement will be marketed as #NoLo meaning No Cost Low Cost textbooks with the new price being $40 or less and will include other course materials and lab manuals. The students were having trouble grasping the concept of OER, so it is believed that moving toward #NoLo will help. There are currently over 130 sections of #NoLo marked on course search for spring 2019, with many sections that are true OER.

“My in-class teaching practices have a wider scope than before; often I utilize internet resources in my classroom. However, this may not be due to OER, rather my experience as a teacher.”
—Michael La Barbera, Assistant Professor of Mathematics

“I’ve returned to doing more collaborative work and to giving students more choice of their own topics. Because I can’t create coherent sets of readings for some topics, I need students to find their own sources and bring them into class. Following the NE OER Summit, I plan to use more open pedagogy. Also, by having to map my course, I gained a better sense of how the course objectives work together. “
—Robert Wyckoff, Instructor of English

HCC is currently in the process of forming a textbook affordability committee under their senate, which they have never had in place.

Due to some of the work on the OER-DI, HCC now has an OER Advisory Council to their Board of Regents for the Connecticut State College and Universities (CSCU) system. Jennifer Nohai-Seaman, HCC’s OER-DI grant coordinator, will be working part-time with CSCU as OER coordinator for the state, beginning Spring 2019.

HCC is not planning on growing OER degrees at HCC or even marketing them. After careful consideration and some debate, the decision was made to grow OER in general naturally, department by department. The next department to take on OER in a larger scale is the Business Department. HCC is currently on the lookout for more funding for them to fulfill their commitment to OER growth.

“Faculty will need adequate lead time to create a new course. Ideally, they should start planning for an OER course a full year before they plan to teach it. It takes a long time to select materials and even more time to design the student experience of those materials. More learning management system (LMS) options would also be helpful. I don’t believe that Blackboard is the right platform on which to build an OER for the simple reason that Blackboard isn’t open—the course disappears to students at the end of the semester.”

“Make sure that OER course mapping and development is recognized as Additional Responsibilities; put together teams of faculty who are working together to change their courses.”

“Start slow and make your own timeline. Figure out which classes are easiest to make OER and then build from there.”
—Robert Wyckoff, Instructor of English

“Expect many challenges that face faculty in properly implementing OER into their classrooms. If you want students to graduate with an OER degree, make sure that there is more than one section of OER being offered for each course.”

“Some faculty have great difficulty finding, editing, or using existing OER in their classrooms. Faculty need ready-to-use contextualized resources for their classes to run smoothly. Also, the degree initiative funds could be better utilized to promote OER at the college, such as giving faculty member incentives for piloting materials in their course.”
—Michael La Barbera, Assistant Professor of Mathematics

Housatonic Community College is located in Bridgeport, Connecticut’s largest city, and serves an eleven-town area in southwestern Connecticut. A member of Connecticut State Colleges & Universities, the college opened its doors in 1966 as a branch of Norwalk Community College and became independent in 1967. In 1997, HCC moved to its present site in downtown Bridgeport. In 2008, Beacon Hall became the second building on the HCC campus. The Housatonic Museum of Art and Sculpture Garden are part of the teaching mission of the college. With nearly 4000 works in the collection and over 1700 displayed throughout the building, the Museum offers lectures, demonstrations, and changing exhibitions in the Burt Chernow Galleries.