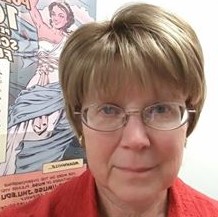 Lorah Gough and I became involved with Open Educational Resources and what was to become CCCOER after meeting Jacky Hood at Rice’s Connexions Conference in 2007. I had the honor of developing the “Find and Select” portion of her grant-supported faculty workshop program while a colleague of ours, Ken Busbee, developed the licensing module. Lorah, Ken, and I taught the various modules here at Houston Community College (HCC) and Ken, who passed away several years ago, also led our first HCC OER Task Force. This past year HCC received a grant to develop a Z-Degree and hired Dr. Nathan Smith, our current CCCOER representative, as HCC’s first OER Coordinator.

It has been an honor to work with CCCOER since its inception by serving as an officer, giving presentations, and receiving one of the OEC’s “Best of” awards. As a librarian, I subscribe to R. David Lankes’ view that “The mission of librarians is to improve society through facilitating knowledge creation in their communities”. All who use, promote, and develop OER serve this same mission, Oui? We are participating in a movement created in the pure spirit of providing the gift of education.

OER has come so far since the first open tutorials, course modules, and resources appeared on a very young WWW in the 90s and since MIT began to open course resources in the early 2000s, but we still have work to do. For my part, I’m getting inspired all over again with a new project to facilitate access to the support materials needed in open education. I’m building what I hope can become a comprehensive database of open access databases. I still enjoy the ride.